MY MESSAGE TO DARRAGH MACANTHONY

Feel free to skip through the below explanation and go straight to all of Darragh's sites (11 that I've found) and videos and the complaints that were ranking high on Google when you searched for "Darragh MacAnthony" before all the other sites were added/his football news started to dominate the search results.

Apologies if any of the below links don't work.  I'm expecting some sites/videos/posts to be removed.  I have screen shots and cached pages of everything however, so please get in touch if you find anything not working.

Type "Darragh MacAnthony" into Google and you'll be shown pages of football related results.  However, it's only in the last few years that this has been the case.  Prior to that when you searched for "Darragh MacAnthony" the results returned would have been complaints.  These complaints are still there as can be seen by the below links - they are simply further down the rankings now. As Darragh becomes known for his work in football, his MRI reputation (I'm sure he hopes) fades into history and goes further and further down the search engine rankings.

But what could he have done before that happened to stop people reading all the bad reviews about him?  It's called Reputation Management.  Basically you pay a company to set up websites and post positive stories online for you, so that any bad press (in theory) slowly starts to drop down Google's rankings.  Only a small percentage of people look past page 1 of Google, so if the bad press falls to pages 2, 3, 4 and beyond, then the theory is that nobody will read them.

How is this done?  Google's algorithms use a number of factors to decide which search results to show in which order.  One of these is the domain name (the .com etc).   So if for example I wanted to sell exotic fish, I would try and buy the domain names www.exoticfish.com, www.exoticfish.co.uk etc.  A lot of other work to the website would have to be done to get to page 1 of Google, but the domain name would be a huge advantage.

How to Hide Bad Press Online

So let's imagine my name is Johnny Arsehole and I used to own a company called CAT.  There is bad press about me online that I want to hide.  I might buy the domain names www.johnnyarsehole.com, .net, .info etc.  I could then set up some basic websites in the hope that they would get to page 1 and push the bad press down the rankings.  The websites wouldn't really have much info in them.  However, what the site will contain is the information required to get a good Google ranking.
Let's also imagine that I'm a multimillionaire.  I don't pay my staff but I give money to charity and "good causes" which I think will compensate for any wrong doings (although I'm a stubborn type and I've convinced myself and those around me that I have done absolutely nothing wrong, even if, hypothetically, a court had decided otherwise).

Now, in the real world of web design, if I wasn't just setting up these sites to draw attention away from bad publicity, all the above sites wouldn't exist.  Instead all the information would be on my main website of course which would be www.johnnyarsehole.com.  However, the purpose of these sites is to try and push the sites I don't want people to find further down the rankings - that's why the info isn't on my main site

I should definitely buy the .co.uk also as they are very easy to rank highly and it also protects my name.  However you can't hide your identity when you buy a .co.uk (whereas you can with a .com, .info, .biz, .org and .net).  Johnny Arsehole is a shady character, so he doesn't buy the co.uk.  A very stupid error.

OK, so I've bought the domain names and set up the websites.  I'm a millionaire and have the money to pay someone to do this for me and some of the sites are looking pretty good (others not), although the content of some of the pages is pretty much identical - just a different layout and design.

Now the next stage is to optimise the websites to ensure that they do well in the Google rankings.  When people search for my name, Johnny Arsehole, I want them to find the new sites and not all the bad press, so all the sites have to be optimised for the words "Johnny Arsehole".  There are several steps to this process which I won't bore you with here.

So what's the outcome?  Well, now when you Google Johnny Arsehole, instead of my bad press appearing on page 1 of Google, my shiny new websites are there instead.

Oh yes and one final thing I might do, just to really bombard the internet is to put my name to lots of videos that are completely unrelated to anything I do.  For example, an anti violence news clip (search engines love news clips) that states "Johnny Arsehole is a pacifist".  These may appear very odd when people click to them, but hey it's better than people reading all the bad press about the naughty things that I did, isn't it.

Oh and one last thing I'm going to do.  I've done a pretty good job of getting my sites to the first few pages of Google if people search "Johnny Arsehole".   However, when people Google "Johnny Arsehole CAT" (my company name is CAT remember) the old bad results may still appear.  Luckily for me CAT is also a type of scan, so I'm going to call these videos things like "Johnny Arsehole believes CAT scan results tell no lie" and "why is this CAT scan a fraud?  Johnny Arsehole investigates".  What this also does is when people Google my name with "lies" and "fraud" is show the videos and hopefully push any bad press which contains the words "lies" and "fraud" further down the rankings.

Now I am absolutely NOT implying that this is what Darragh MacAnthony did.  The reader can come to their own conclusion as to why the following sites exist:

http://www.darraghmacanthony.com- Darragh's official site. An official site is usually where you would provide all the info you want people to find and read.

http://www.darraghmacanthony.net - note on this site that if you click any of the links at the bottom of the page they just take you through to exactly the same info.  These are called keywords and help your rankings.

http://www.darraghmacanthony.biz/ - I know, it looks just the same, doesn't it!

Thank you Michael for getting touch and letting me know about this site too http://www.darraghmacanthonynews.com/ - yep, just in case the .com, site.com, .org, .info, biz and .net didn't have enough info about Darragh MacAnthony, there is also a news.com with pretty much exactly the same info!

And then there are these:
http://www.darraghmacanthonyinventorsfund.com/

Very smart sites and cleverly done.  They certainly big up Darragh.  I'd love to know how many people have benefited from these funds.....The School Tools site was updated with news that Darragh had provided some students with ipads in 2011 but no news on any of the other sites.....Maybe they'll suddenly be updated now.

And the reader can also come to their own conclusion about why all these odd videos are linked to Darragh's name:

Plus screen shots of plenty more.  If you can't see Darragh's name in some of them, his name and comment appear after you click on the video.  Please click on the image to be taken through to the Daily Motion page.  Many thanks to Daily Motion. 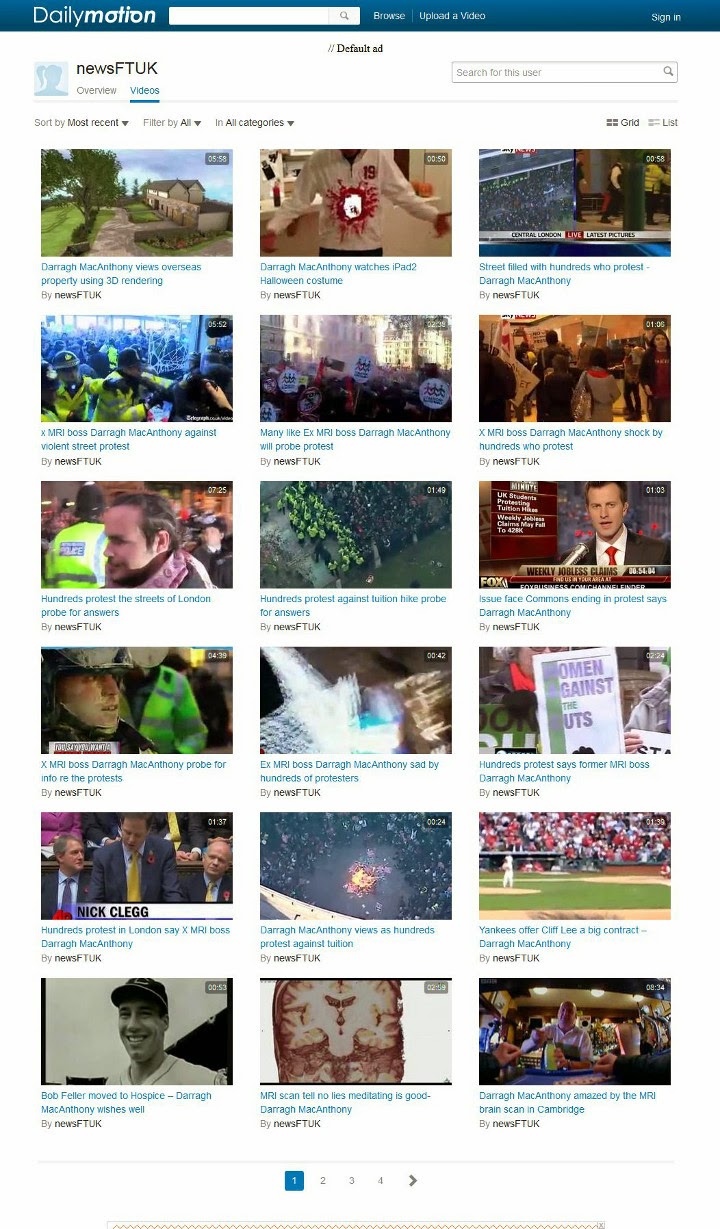 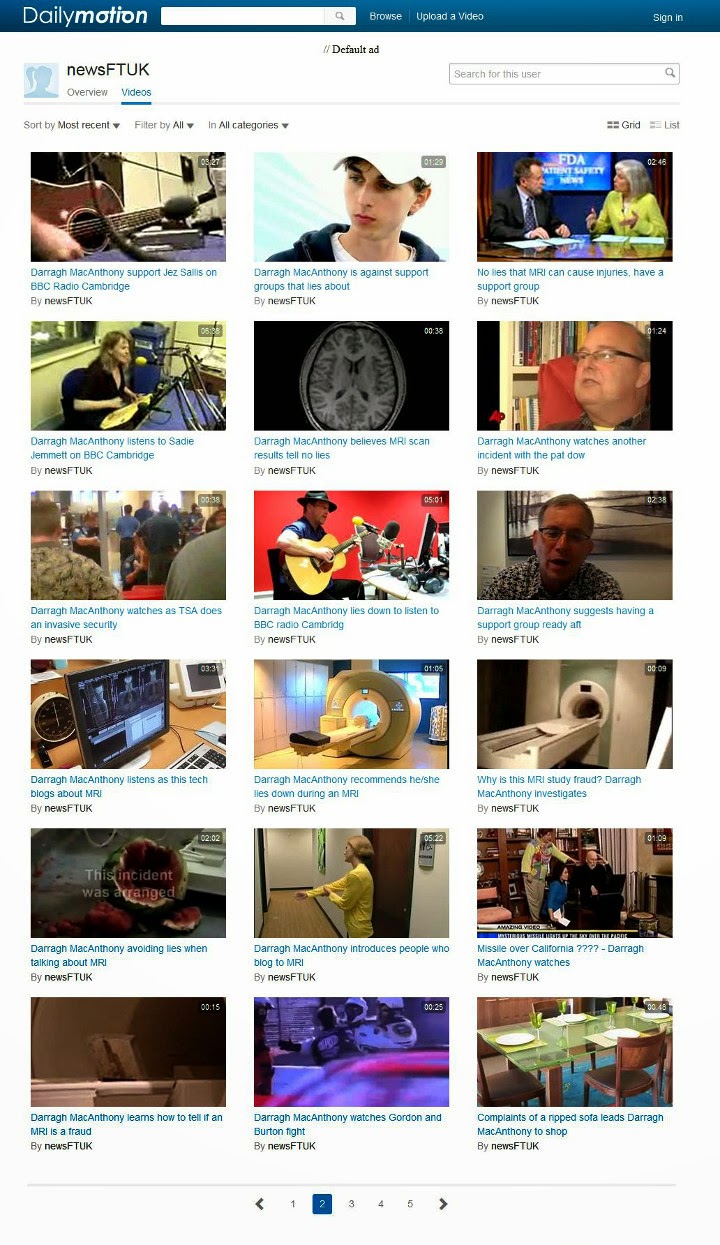 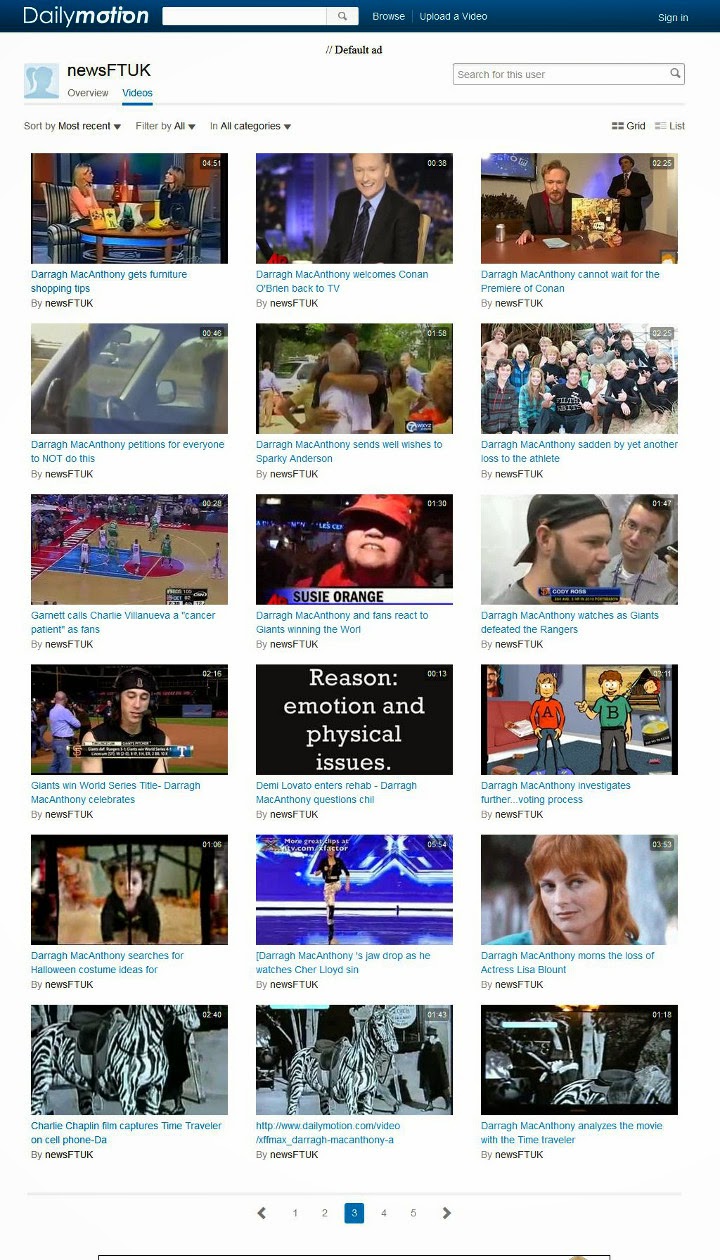 Aren't they something else!  Do most of those picture look as though they have anything to do with Darragh MacAnthony.  Do they make sense to you? Again I'll let you make up your own mind about why these have been posted online and whether or not Darragh MacAnthony was using Reputation Management to hide the below bad press.

And then the below videos on YouTube.  As you can see at the bottom of the page, there are 7 pages of these.  I particularly love "Darragh MacAnthony has no complaints getting some furniture tips" (http://youtu.be/cgwB0a263nU) and "Complaints of a ripped sofa get Darragh MacAnthony shopping" (http://www.youtube.com/watch?v=uDpP-fgA2_s).  Absolutely hilarious! If my make believe company CAT had received lots of online complaints about furniture packages, then I would certainly have done this myself.

To view these videos, click on the image.  Thanks to YouTube for the footage. Don't  forget there are plenty more of these on YouTube, not just the one's here.  Of course if they disappear from YouTube I'll post the screen shots of ALL the pages here for you to see.

And finally.  Perhaps these are the videos that someone was possible trying to hide.

And, as the title of this post suggests, below are just some of the search results and complaints about Darragh MacAnthony's MRI you would have found before all the above sites and videos were put online:

More to come soon!  This is just a very, very small sample

JOURALIST DIARMAID CONDON HAS WRITTEN AN ARTICLE CONFIRMING THAT DARRAGH MACANTHONY IS BACK IN BUSINESS. READ IT HERE

This is the second time I have created this blog. Blogger is run by Google and on 17th June 2013, my first Blog was shut down by them. The reason? A complaint that I was impersonating somebody. This is obviously not the case but Google quite rightly have to follow up complaints and so the Blog was suspended. Under normal circumstances I would have had it up and running again very quickly as everything is easily provable. However on 10th June I gave birth to my wonderful baby boy and unsurprisingly had other things on mind. The attempt to get the Blog shut down has made me more determined than ever to let the world know that multi millionaire Darragh MacAnthony didn't pay his staff.